Less Than 1% of Hackers Can Bypass Facelock Security App 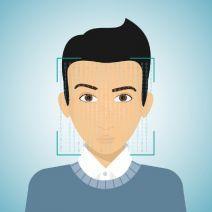 People use and reuse old passwords time and again, and then they get two-factor authentication to augment their fifteen-character passwords. Wouldn’t it be great if your computer could recognize you just by how well you recognize others?

Security using facial-recognition technology isn’t a new thing - in 2000, the Passface system used a similar concept, where it replaced passwords with a series of pictures based on your friends and family. This was somewhat effective, but those who could figure out the pattern were able to get into the system fairly easily.

Facelock is a new concept of facial-recognition technology. Instead of concentrating on technology that lets you define pictures in a specific pattern, it concentrates on whether or not you can identify familiar faces. In other words, the faces you know can help you keep your system safe from intruders, rather than just being another code for a hacker to crack. Unless a hacker can tap into your memory, they probably can’t crack your Facelock password.

What a Face-full!
This technology backs up its bark with its bite. A study was done on over 400 participants, which included account holders, stranger attackers, and familiar attackers. These tests were conducted over the course of one-week and one-year increments. Account holders were asked to choose the faces of several lesser-known celebrities in a narrow field; this mitigates the chance that threats will be able to access the system.

Results showed that after just one week of using this technology, 97.5 percent of users could authenticate their accounts, while stranger hackers succeeded less than one percent of the time. This number jumped to 6.6 percent for attackers that knew the victims personally. And, after a full year of working with the software, 86 percent of all users were able to authenticate. The test also examined whether attackers could authenticate with different photos of the same people. Unless the photos were of distinctive people with very prominent features, such as a bald head or round glasses, hackers were unable to identify pictures of the same people.

Keep in mind, as great as this technology is, it isn’t really a good fit for business devices that may need support and troubleshooting. If your help desk technicians aren’t in your circle of friends, they won’t be able to log into your device to help you solve your problem.

It’s a fairly simple concept - passwords don’t work for humans, and the existence of a “Forgot password?” prompt reinforces this. But, does facial recognition take this a bit too far? Is two-factor authentication enough for you? Let us know in the comments. 3 Common Threats You Need to Know About: Malware, Rootkits, and Trojans
Security is one of the most important parts of running a business, especially today when organizations rely so heavily on their technology solutions. Some of the most dangerous threats lurk on a business’s network, watching and waiting for an opportu... A Simple Guide to Understanding HIPAA
Security has never been easy for any business that deals with sensitive information. Nowadays, even a small business that uses an Internet connection has to worry about hackers and malware of all types. This is especially problematic for small health... Tip of the Week: Protecting Against Identity Theft in the Workplace
On average, how many people do you think are affected by identity theft? According to the United States Bureau of Justice, about five percent of its population; about 11.7 million people, are victims of identity theft. Their methods might vary, but t... Make Sure Your Business Isn’t in the Headlines for the Next Big Cyber Attack
Based on the headlines you see today, it’s no question that cybersecurity is something that every business owner should be concerned about. As attacks become bigger and more frequent, all decision makers must ask the question: who needs to step up an... Tip of the Week: 2 Easy Ways You Can Minimize Network Security Issues
Security issues can have any number of causes, meaning that every business needs to have a comprehensive security solution. This doesn’t mean, however, that there aren’t additional, small measures to implement that can give your organization’s securi... Are Shortcuts Sabotaging Your Progress?
When your organization is implementing a new project, there are a lot of expectations and deadlines that are watched with a close eye. While it might be ideal to get the project finished as quickly as possible, doing so can put a lot of pressure and ... You Need To Be Familiar With Patching Terminology
Over the past several months, while watching the news or reading about business and technology, you’ve probably encountered a few words, such as ‘ransomware’ ‘exploit weakness’, and ‘security patch’. These terms are used often, and you may be confuse... Your Business Needs To Manage Mobile Devices For The Sake Of Its Security
Businesses can benefit from the use of personal mobile devices in the workplace, yet there are also potential dangers in allowing mobile and Internet of Things devices to access your network. In order to reduce these dangers, you need to put some lim... Your State Dictates Data Security Notifications… Will You Be Notified?
In the last few months, there have been several high-profile data security breaches that resulted in the theft of millions upon millions of non-public information records. Though much of the focus in the aftermath of the breaches was on personal iden... Virginia To Upgrade Voting Machines. Hopefully Other States Follow Suit
The 2016 United States presidential election was an ugly one for multiple reasons--chief among them the accusation that hacked voting machines could have altered the outcome of the election significantly. Thankfully, there are steps being taken to al... Why You Should Pay Attention to Data Security Notifications
If you’ve watched the news lately, chances are you’ve seen the Equifax breach and the ridiculous fallout it has caused. Over 133 million personal records have been stolen. While it’s difficult not to feel individually victimized by such a breach, it’...